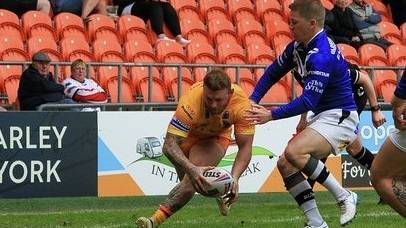 Rochdale Hornets travelled to Bloomfield Road as they took on rivals Swinton Lions at the 2019 Summer Bash.

A brace of tries from Swinton’s Matthew Ashton saw the Lions come from behind to pick up a 40-30 victory in the baking Blackpool sunshine.

The opening seven minutes were a proverbial arm wrestle to say the least, but it was the Lions who got on the score sheet when a kick from Fairclough was spilt and fell into the arms of Mike Butt who touched down unopposed.

Rochdale were not behind for long though applying pressure to the Lions defensive line, the use of quick hands was a factor in Rochdale’s first try of the afternoon. A pass out wide fell kindly to Brandon Wood who managed to spin round the Lions defence and touch down.

It took another 7 minutes for the Hornets to get on the scoresheet with Dan Abram performing a piece of Rugby League magic when he side stepped two defenders passing inside to full back Declan Kay who touched down to give Rochdale a 10-6 lead.

Matt Calland’s side continued to force errors from Swinton, coming close to scoring on multiple occasions, however it was the Lions who found the try line next when second rower Frankie Halton barged his way through the Hornets defence to make it 12-10.

A milestone was reached for Shaun Ainscough with ten minutes of the first half left with the winger going over on the right hand side from short range to score his 100th career try, even managing to pull out a snack to celebrate with.

The Hornets were not done yet as fittingly Harvey Livett produced something that Stanley Matthews himself would be proud of.

The loose forward kicked a loose ball towards the try line dribbling it past the Lions defence before touching down next to the post just as the half time hotter sounded to give Rochdale a 24-10 lead at half time.

Just like the first half it was Swinton who started the second half the better side when a cross field kick was caught by Matthew Ashton who touched down for his first of two tries.

A well worked Hornets attack saw winger Shaun Ainscough grab his second try of the game when he went over in the corner to restore Rochdale’s 14 point lead.

Swinton then turned up the gears scoring two tries in the space of three minutes when Rodri Lloyd and Jack Hansen found the try line to bring the scoreline to 30-24.

In the 61st minute there was a short stop in play as a Swinton player received treatment, but two minutes later Rob Fairclough went over for the Lions to make it 30-28.

With 13 minutes of the match left the Hornets had to repel multiple attempts from Stuart Littler’s side and the Lions found the line once again when Liam Paisley capatalised on a spilt ball.

As the Hornets battled hard they shifted the ball out wide but a looping pass to Brandon Wood on the wing was intercepted by Matthew Ashton who ran the full length of the pitch to seal the game for the Lions.